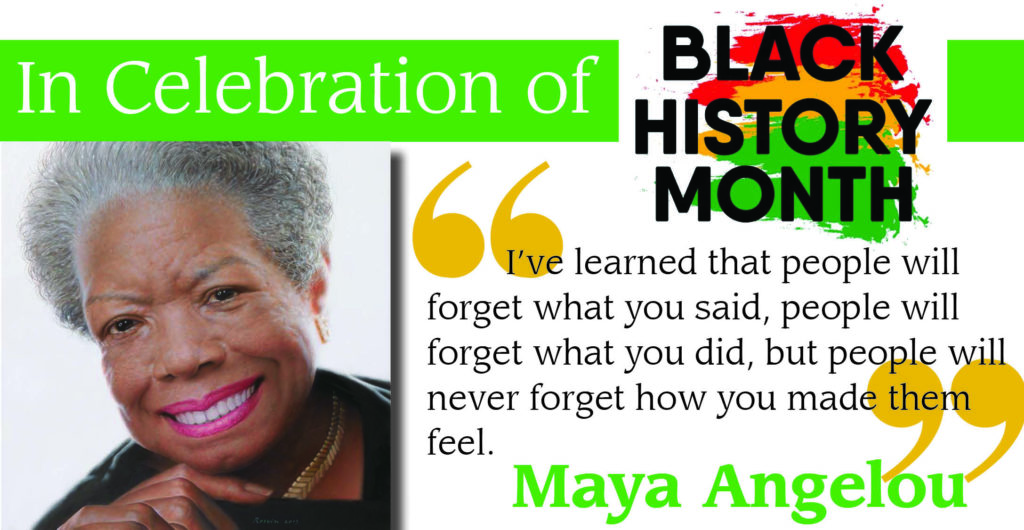 In honor of Black History Month, Noble’s Diversity & Inclusion Council is sharing the contributions of Black Americans to our world. Today, we celebrate Maya Angelou.

Throughout her life, Maya Angelou accumulated so many awards and honors that it’s difficult to put a single label on her legacy. Among her many contributions, she was a writer, civil rights activist, poet, filmmaker, actor, and educator.

Writer  She is perhaps most famous for her best-selling, award-winning autobiographical book, I Know Why the Caged Bird Sings, about her upbringing in the South. The book was one of the first ever written by a black woman to garner widespread readership, according to The New York Times.

Civil Rights Activist  She was active in the Civil Rights movement and served as the northern coordinator for the Southern Christian Leadership Conference in 1959. Later, she worked with Malcolm X.

Poet  She released her first collection of poems in 1971. She read one of her works, “On the Pulse of Morning,” at President Bill Clinton’s inauguration in 1993.

Filmmaker  She wrote the screenplay for the 1972 film, Georgia, Georgia—the first script by a black woman to be made into a Hollywood movie. It was nominated for the Berlin Film Festival.

Actor  She acted in the movies Calypso Heat Wave and How to Make an American Quilt. For her performance in the 1977 television show Roots, she received an Emmy nomination.

Educator  She received around 30 honorary degrees, and lectured at universities across the country. At several schools, including Wake Forest University, Wichita State University and California State University, Sacramento, she served as a distinguished visiting professor.

Adapted from an article written by Rachel Nuwer, SmithsonianMag.Com, May 28, 2014