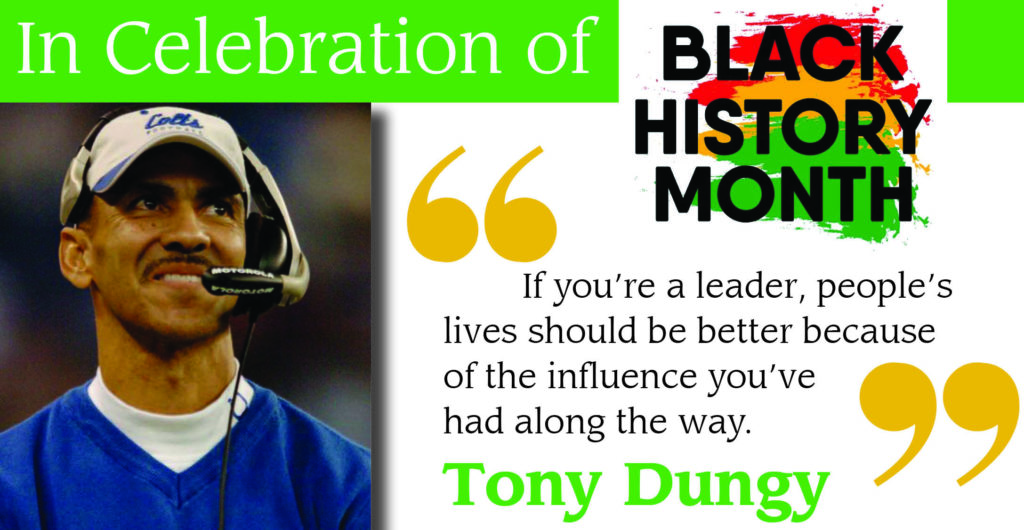 Next up in our Celebration of Black History Month: Tony Dungy.

He began his head coaching career in 1996 with the Tampa Bay Buccaneers, a franchise regarded as being near the bottom of the league. However, his leadership brought new success to the Buccaneers, leading them to four playoff appearances in six seasons.

He went on to coach the Indianapolis Colts for seven seasons, qualifying for the playoffs in each one. He led the Colts to victory in Super Bowl XLI—the team’s first since relocating from Baltimore. In the process, he became the first black head coach to win the Super Bowl.

Since retiring after the 2008 season, Dungy has served as an analyst on NBC’s Football Night in America. He was inducted to the Pro Football Hall of Fame in 2016.

Perhaps his greatest impact, however, has been his advocacy for the National Football League to diversify its leadership. On February 4, he sent a letter to NFL owners stating that the league he loves has a major problem when it comes to hiring minority coaching candidates. Just two minority candidates were hired during the entire head-coaching cycle: Jets head coach Robert Saleh and Houston Texans head coach David Culley.

“I believe our league has a problem that only you can fix,” Dungy wrote in an open letter to NFL owners (via NBC Sports). “The problem is we are not utilizing all of our resources because we aren’t truly embracing minority hiring in every aspect of our game.”

Adapted from an article by Mike Kaye of NJ Advance Media, February 4, 2021